Ethics & the Literary Agent: What Rights Do Authors Have?

A must-read! Chris the Story Reading Ape posts guest interviews with agents that shed strong light on what an agent’s life is like and how authors can be better partners.

Today’s guest post is a literary agent Q&A by Sangeeta Mehta, a former acquiring editor of children’s books at Little, Brown and Simon & Schuster, who runs her own editorial services company.

By definition, literary agents are writers’ representatives. They work for writers, negotiating offers from publishers until their client deems them acceptable. But in today’s complex agent-author relationship, many writers feel that they aren’t in the position to negotiate with their agent, partly because they don’t understand the publishing landscape as well as their agent does, but also because they are wary of coming across as difficult or demanding.

Although it’s becoming more common for writers to change agents several times during the course of their careers, most would prefer to stay with one agent. But are writers really in the position to speak up if they feel that an agent isn’t honoring their obligations…

Back from a loooong holiday break and finding things to share!

This post from Writer Unboxed plugs Donald Maass’s latest book, The Emotional Craft of Fiction: Writing the Story beneath the Surface. But: a) you may want to know about this book, and b) the included interview is worth reading in itself. I’ve been sharing with some  of my Internet Writing Worship cronies some thoughts about that “story beneath the surface” that strokes in depths beyond simply solving a problem, depths that help us think about what the real problems are. This concept is similar to what M.Dellert calls the “plight,” the question behind the plot that the character and the reader must struggle to define together—and often cannot rationally answer. The plight, the story beneath surface, are the forces that shape our human understanding, not just our ability to string cause-and-effect together. It’s been a while since I bought a book on craft, but I just may buy this one. I thought you might like this news.

On Writing, from Joyce Carol Oates: A new interview

Check out this rich interview with a great writer!Which of her books have you read? Which do you admire, and why?

My Inerview is up at Don Massenzio’s site. Go admire my sweet Paddy! 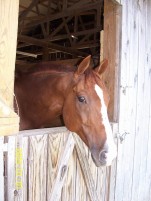 Check out my writer’s interview, now available at Don Massenzio’s site! This was a lot of fun to write.

When in doubt, I ask Bill.

Lurking around on an NCTE forum for English teachers, I learned about Bryan A. Garner’s Language Change Index and thought it nicely complemented some thoughts I’ve posted on this blog about grammar and usage. An interview and a critique discuss his efforts to do more formally what I did informally in ranking usage practices by how widely they’re likely to actually be noticed (see “split infinitive”) by the learned folks aspiring authors need to impress. What emerges for me, based on the examples in these articles, is how idiosyncratic grammar prescriptives can be. BTW, “hopefully” is now a Stage 5, not, in my view, because it ever was an “error,” but because it has been recognized as a perfectly good sentence modifier along the lines of “unfortunately” or Garner’s example of a “correct” sentence modifier, “regrettably.” No identifiable subject has to “hope” any more than an identifiable subject has to “regret.” So there.

END_OF_DOCUMENT_TOKEN_TO_BE_REPLACED

If, like me, you go through stages in your writing career where you feel isolated and in need of connections with other writers, you may have sought out a writing group–or perhaps even considered starting one. Of course, online resources let us share our writing and collect tips from a plethora of experts. But these tips can be generic, not specific to our needs, and even strong online critique groups can suffer from the limitation of all online “teaching”: the loss of body language and verbal cues and the difficulty of eliciting immediate responses when we have questions about a comment or need follow up.

Recently I’ve read and shared several posts about writing groups, and I’ve written before about my group and how I value it. Some commenters have mentioned joining groups that folded or that didn’t work for them. I realized that my group, Green River Writers, based in Louisville, Kentucky, is an example of a group that has held together for decades. What exactly does make for a successful, long-lived writing group?

One important factor in the group’s longevity and success is its founder and president, Mary “Ernie” O’Dell. I cornered Ernie to learn about how the group began and why it has succeeded.

Today’s post introduces Ernie and her journey as a writer—a journey many of us can identify with in some ways.

A little about Ernie

I immediately asked about one thing I’d often puzzled over: where “Ernie” came from.

It comes from Mary Ernestine O’Dell. Dad’s name was Ernest Forbis Houck. I was named after him and his friends called him Ernie, so when I got in junior high, and was asked what my name was, I said Ernie. So that’s where that was born.

Three of Ernie’s novels have been published by Turquoise Morning Press in Louisville: Cyn, The Sweet Letting Go, and Banger’s People. I asked Ernie about the settings and ideas that fed into her books.

I grew up in West Virginia and the southern and eastern Kentucky region. All the books have the flavor of that region; two of my books involve the West Virginia coal-mining industry: Cyn and the one I’m working on now, which I’m calling “Hope” for the time being. [Hope is one of the main characters, a high-schooler who lives with her older sister Lily and their parents and siblings in a coal-mining town just at the outbreak of World War II.]

Cyn takes place in the neighborhood of little row houses where my daughter became friends with the next door neighbor when they were seven or eight. The opening scene, the little girls in the elderberry bushes getting elderberry stains on their clothes, that was me: I would play in the bushes behind our house with my little cousin and get stains on me and my mother would not like that.

The interesting thing about Cyn was that I wrote in five different points of view. When Sheri McClaren, my mentor, read the first draft, she loved all these characters except the little girl’s father. She needed to know why the child loved him, because she wouldn’t have loved him if he had been her father. So I had to go back and rewrite the little girl’s father, and in doing so I had to figure out where I found him, who he was, and why he was so judgmental and vindictive. I discovered that he was my first husband who was a minister for some years. Then I had to find out why this fictional person would be this negative. I made him the son of an alcoholic and youngest son of three brothers, two of whom were alcoholics; they all made fun of him the time. I had to really deepen his character so he wouldn’t be such a bad guy that no one would care about him.

I wrote The Sweet Letting Go a few years after my second husband (my real husband) died of lung cancer. I was his main caretaker, but I didn’t want to make it autobiographical. I turned the whole thing around to make the female the one with the serious illness with the male as her caregiver.

Ernie’s writing career began during her career as an elementary teacher in Louisville. END_OF_DOCUMENT_TOKEN_TO_BE_REPLACED