Which is Most Important: Character, Conflict, or Crisis?

As I’ve been reading around in the Indie-verse, I’ve found a couple of books I’ve decided not to finish. As both a writer and a reader, I’ve thought about what triggers me to abandon a book.

One feature that has stuck as a cause for my reaction can be summed up in advice Brian Klems of Writer’s Digest provided at the Writing Day Workshop I attended in Indianapolis in October:

Begin with conflict, not crisis.

In other words, writers I’m deciding sadly to give up on often begin with their characters in crisis. But Klems’s advice reminds me of a cruel but vital truth:

Sorry, but there it is. 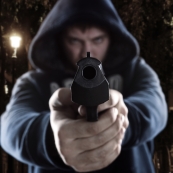 When these writers begin their books, they have three Cs to deal with: Crisis, Character, and Conflict. It may sound counter-intuitive to state that, of the three, Crisis is the least important!

I know, I know: begin in medias res. But not when the folks in medias are just names on a page.

Can you pile on character, conflict, and crisis in opening scenes? I thought I’d try an experiment to find out.

Sally found herself staring down the barrel of a gun. She stumbled backwards. He fired. The shot narrowly missed.

Crisis, big time. And a couple of what Paula Munier calls “micro-story questions,” the elements that help to deliver what she calls “narrative thrust.” Who’s shooting at her? Why? Will she escape the next shot?

Okay, I’d read on to the next bit. But if the following three pages consisted of her efforts to flee his escape, I’d be flipping ahead to see whether things got more interesting than an abstract flight-and-pursue.

What if, instead, you read:

Of course Mark was going to pull the trigger. When he threatened, he always delivered. Sally flung her hands up, stupidly, since they wouldn’t stop a bullet, and sprawled on her butt on the wedding dress jumbled on the tack room floor behind her. The gun went off in a brain-numbing explosion, the bullet slamming into the row of bridles hanging just above her head. 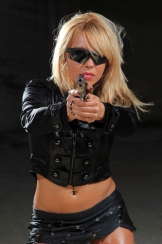 Take that, Mark, you scum!

We still get to the crisis pretty fast, but now we have many more micro-story questions. First, we’ve got conflict: these people have a history. It’s not just a question of why he’s shooting at her, but what between them has happened before to trigger her recognition that this isn’t a joke. “Why and who?” becomes “How does she know this about him? What has he done to make her think this now?” There’s a whole history of people in those queries.

More importantly, that wedding dress. Wedding dress? How in the world did a wedding dress get in the floor of that tackroom? And why a tackroom? We now know that these people somehow connect with horses, and that someone (Mark? Sally?) has just been through (or approached) a wedding. And he’s the determined sort who shoots first and asks questions later, while she’s (at present) a bit reactive and self-derogatory (calling herself “stupid”). Conflict and character as well as crisis—leading to a cornucopia of story questions! And all in the same number of sentences, four.

Some of my writing group colleagues are absolute minimalists and would opt for the first austere and abstract version. But to me, pure action is not nearly as engaging as action involving people I know or people I’ve been made deeply curious about.

An experiment like this leads to me be suggest that if you must demote one of the three Cs, let it be crisis! What? Start flat, with just characters in conflict? Well, yes. 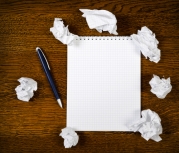 As Stephen King argues, narrative tension arises not from wild, boisterous action but from people in “situations,” where they must react to each other and to the problems their situation presents.

True, you can’t spend pages on this development. It has to happen in that medias res moment, through careful pacing and selection of details.

As an illustration of how little we need a doomsday crisis, consider these opening lines from Suzanne Rindell’s The Other Typist:

They said the typewriter would unsex us.

One look at the device itself and you might understand how they—the self-appointed keepers of female virtue and morality, that is—might have reached such a conclusion. Your average typewriter, be it Underwood, Royal, Remington, or Corona, is a stern thing, full of gravity, its boxy angles coming straight to the point, with no trace of curvaceous tomfoolery or feminine whimsy. Add to that the sheer violence of its iron arms, thwacking away at the page with unforgiving force. Unforgiving. Yes; forgiving is not the typewriter’s duty.

We’ve got character, even though we haven’t met the speaker. We’ve got conflict: That nameless “they” is already on trial! I haven’t yet read this book Will I? If it lives up to this crisis-deprived opening, you bet.